I've always been a little on the obsessive side with birds.
I can watch them for hours and never get bored.
I talk to them, out loud.
It's just the way I've always been.
I called them "biccies" growing up.
I never grew out of it.

I fell in love with Hummingbirds the first time I came across them in the midwest a few years ago - there's something uniquely spiritual about them.  I'd watch them endlessly and tried taking photos of them but failed miserably. I've photographed multiple species of Hummingbirds since then, mostly in the Ecuadorian Rainforest... but there's nothing quite like having a 'resident' Hummingbird. It's a very special kind of privilege.

While sitting on my balcony one Saturday morning in January (January 3), I spotted a Hummer chirping away. Insta-thrill. I sent this text to my sweet Mum who lives in England : "Yay. I've got a Hummingbird. He's a chirpy little fella".  Of course "he" turned out to be a "she" :)

I watched this Anna's Hummingbird (fondly known now as Annabel) visit my feeder and zoom around the courtyard every weekend since. She flew over to me and my dog several times, as if she was checking us out, figuring out if she could trust us. Then one morning in early March I noticed her being particularly active and loud. She flew into a tree by my balcony and I couldn't believe it when I saw her lay down... gah, it's a nest. I grabbed my camera quickly, flipped it to video and started to film...within the next couple of minutes I captured this beautiful Anna's Hummingbird laying her first egg of Spring. Magic. I was gobsmacked.

And so The Hummingbird Project was born.

I will post periodic updates here in the form of video and photographs. I hope you enjoy following along with the evolution of beautiful life; an inside view of nature at it's finest.

Below you will see a whole host of videos and photographs of Annabel and her little family. It's been an absolute joy to watch and film them over the past couple of weeks. There have been lots of questions coming in along the way, so just look to the right and you'll see some of the most commonly asked questions along with my response.

At 10 & 11 days old, today I saw the first wing flapping of the chicks. Their wings started as tiny little stumps but now are developing little feathers. They are growing extremely fast now and have doubled in size in the past couple of days.

Annabel didn't sleep on the nest with her chicks last night - this was the first time. (yes, it made me anxious). They are now old enough to self-regulate their body heat, so they no longer need her for this...which is great timing because she can't fit in the nest with them any longer any way. They are getting so big - see my video "All About The Chicks" below to see how they've grown over since hatching.

Annabel was not at the nest last night (this is the second night in a row and is normal behavior now that the chicks are bigger and can regulate their own body heat). It rained quite heavily, waking me up 2:20am. I checked on the chicks and they were alone but the nest intact. Same at 3:30am. I checked again at first light and Annabel was there protecting them. I'm sure she hadn't anticipated the rain and as Hummers do not have good night vision, she wouldn't have flown when the rain started. She is soaking...they are too. Poor things. We really really need this rain though and I suppose they have to adjust to all weather conditions around here at some point.

The chicks are growing so fast and are snuggling so closely in the nest. Annabel has been around much more since the rain scare a few days ago. She has a large leaf at the top of a tree she likes to rest on...she can see my feeder and her babies from there. The chicks' feathers are growing quickly, as are their wings. They are happily engaging in regular wing flapping now...it's lovely to watch.

The chicks are getting bigger and stronger every day. They are spending more time preening and flapping their wings as they prepare for their big day, which should be with us by the middle/end of this week. I have found another Hummingbird nest in another young Oleander on the opposite side of the Courtyard. I'm fairly certain it will be home to Annabel's next brood.

It's amazing how much fluffier the chicks got overnight. They are really starting to look like Mama now...even their beaks are getting longer and more slender. They are lifting their entire bodies out of the nest now as they flap their wings. They are getting so close to being ready. It's bitter sweet. Oh how I will mis these little treasures.

After a fun contest on Facebook, the chicks have been named Zazu and Caly. Zazu is 3 weeks old today and has not fledged yet. It's getting very close.

We have a fledger!! Zazu has vacated the nest, leaving Caly there all on her lonesome. I located Zazu in a tree just 10ft or so from the nest site. He is practicing his flying and on least one occasion was caught mid-air by Annabel and lowered to the ground by her. A truly beautiful moment to watch as she observes his attempts to get around. I imaging he'll be much stronger tomorrow and that Annabel will be paying more attention to Caly as she should be fledging tomorrow.

I expected Caly to fledge today as she reached the 22 day mark but alas, she must be too comfortable in the nest on her own...she fits it perfectly. Annabel seems quite content to only have one loose canon to keep track of. She has been chasing Zazu quite a lot and even tried to pull him off a wall when he got himself stuck 30ft in the air. It's fun, and nail biting, to watch.

Caly has still not left the nest. She is getting some really amazing wing strength training in. The kind that Zazu was just not able to do with another chick in the nest. I think she'll be really strong when she finally leaves. Fingers crossed.

I woke up this morning, took my dog for a walk, and then went out to check on the nest. For the past week, the nest has been completely silent with zero action at 8:30am. But not today. It was empty. Gah, I missed it AGAIN. Grrrrrr. I searched around looking for Caly and I couldn't see her anywhere (not unusual given that she's tiny and looks like a leaf). Finally I noticed that she was standing on the same branch as the nest. She hadn't gone very far yet at all. She spent around an hour in the nesting tree, moving from branch to branch. She even had a visit from Zazu, which was totally adorable (tell me they don't have a bond). Caly finally got a move on when Annabel grabbed her by the scruff and pushed her off one of the top branches. You'll see all of this in the video here, which captures her first couple of hours post-fledge. After Mama gave her a little push, she was plain sailing. Whizzing from tree to tree like she'd been out of the nest for ages. She is, without question, stronger than Zazu... so don't always believe that the younger chick is the weaker chick. Certainly not true here. She is flying more today, and more confidently, than Zazu...and Zazu is on his fourth day out of the nest.

Where are you? SF Bay Area, California (Silicon Valley)

Why are the chicks' beaks so short?
Their beaks were short when they hatched because EVERYTHING was tiny when they hatched. As with the rest of the their development over a vey short period of time, their beaks have grown rapidly and at the time of fledging (3 weeks after hatching) they were very close to being as long as Mama's beak.

How big are they? Tiny. Mama is ~4 inches long. Babies were no longer than 1inch when they hatched. At the time of fledging they were around 3 inches long. The nest

How big is the nest?The nest was really tiny to start with (~1 inch in diameter, designed to ensure that the eggs and then the chicks at a very young age were able to stay warm. Made out of spiders web, it is designed to stretch as the chicks grow. It more than doubles in size by the time the chicks both fledged.

What kind of tree is the nest in?
This is a young Oleander (poisonous to most animals)

Where is their Father?Hummingbirds are very solitary animals. The females socialize with the males for mating only. The female builds her nest, incubates, and takes care of her young alone.

How long do they stay in the nest? Hummingbird chicks usually fledge 3 weeks after hatching. These chicks fledged at 22 and 24 days old, respectively.

What happens when the chicks can fend for themselves?
Once the chicks fledge, Mama Annabel will continue to feed them for a few days as she teaches them life outside the nest and as they learn how to use their wings . Then she will chase them away to find their own territory. Sad, but true. (I really hope they break this 'rule' and decide to all live together in my back yard) :)

What do Hummingbirds eat?
Their main diet is pollen (you'll see them hovering at flowers to eat) and bugs, which they will catch mid-air. They also consume sugar water from feeders for a quick source of energy (see recipe below).

What is the recipe for sugar water?Boil 4 cups of water. Mix in 1 cup of regular white table sugar to dissolve. Let the mixture cool before putting it in the feeder (I make mine at night and leave it in the fridge to cool overnight). Store the liquid for a week in an airtight container in the fridge. Replace the sugar water every few days, making sure it doesn't spoil.

IMPORTANT: Clean the feeder regularly to prevent bacteria that can kill the birds. Please, if you cannot maintain a Hummingbird feeder properly, go with flowers instead. It's not worth harming these magical birds and flowers will attract them just the same if not more so than the feeders.

Where can I find more videos, photos, and info?

Laying the Egg. A Wow Moment.

Annabel and her Angels - 8/9 Days Old 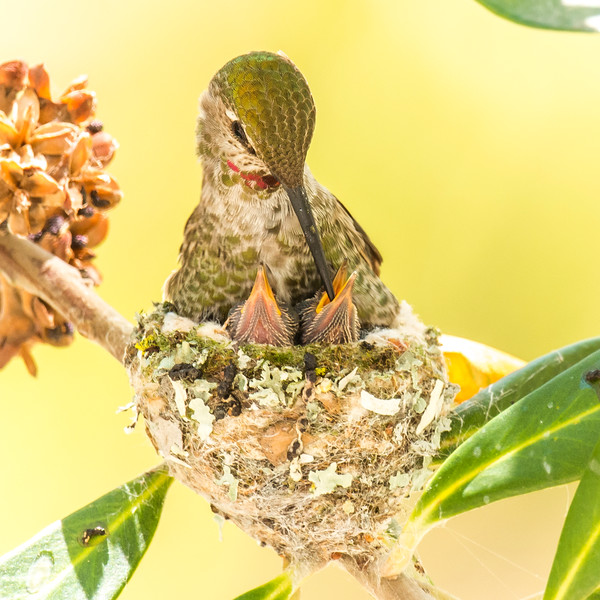 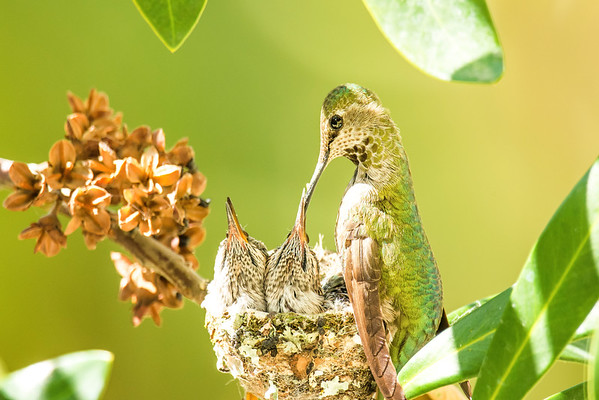 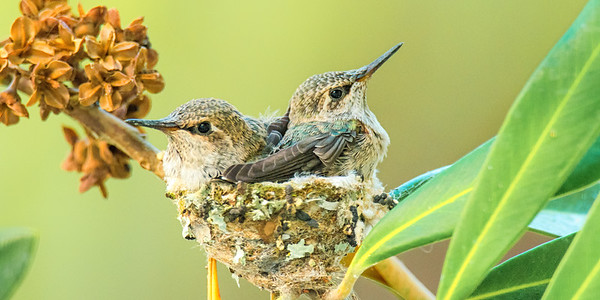 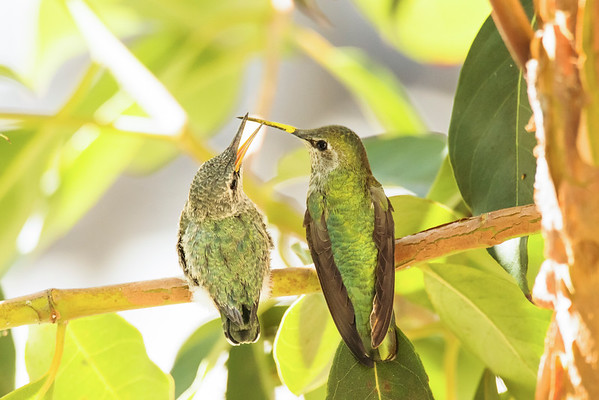 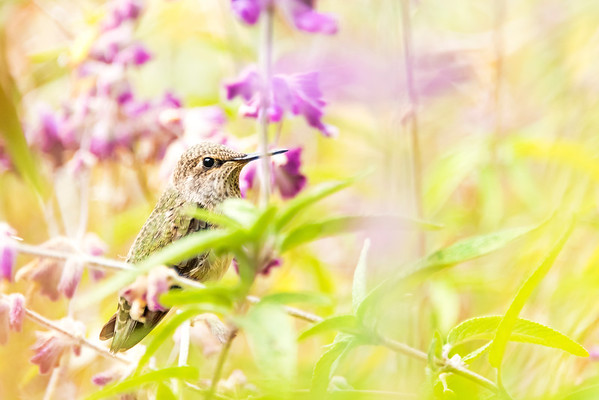 I would not be able to document this incredible footage without the tremendous support from Smugmug and BorrowLenses. They believe in this project, as do I, and I really appreciate them helping me make this possible. 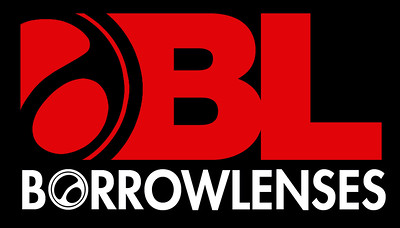